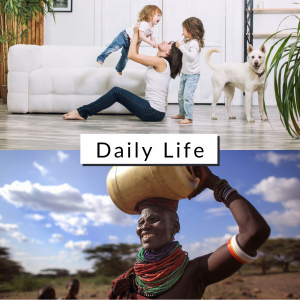 How’s the weather?  On any given day, in any given weather condition, I’ll bet you can get lots of different answers to that question.  Because, believe it or not, different people actually prefer different kinds of weather.  For instance, some people actually like snow and some people really do like rain!  Not everyone likes unrelieved sunshine, lollipops and rainbows.

When I lived in Coeur d’Alene, Idaho, I learned that the winter weather there was subject to something called “the lake effect.”  Without going into a technical explanation of what that means, suffice it to say that it was often cloudy during Coeur d’Alene winters!  It was this weather more than anything else that helped to send the newly-transplanted Californians packing every January!  Isn’t this what Darwin called “natural selection?”

One winter day in Coeur d’Alene, several of us were gazing through the wall of windows in City Hall.  As we took in the view of the adjacent park and lake, we speculated on the best way to describe the scene.  It was a cloudy day with some old snow on the ground.  On days like this, it was hard to distinguish between the snow on the ground and the clouds in the air.   Some called it a “gray on white day;” others thought it was more of a “white on gray day.”  The world outside had become a grayish blur, which soon ceased to interest us and we went back to our work stations.

Not long after this, the Mayor was engaging in what we called “MBWA” (Management by Walking Around), and he came to our department.

Seizing the opportunity to spread some cheer, he said to me, “It’s a beautiful day, isn’t it?”

“Not if you’re wearing rose-colored glasses like me!” he stated, with a self-satisfied smile.

“If you say so,” I replied with skepticism.  “But personally, I see a gray-on-gray day.”

“Oh, don’t be like that.  You ought to have my positive outlook, so you can be happy like me.”

“So, you’re saying that you have to fake your reality in order to make yourself feel better?  Me, I prefer to just take reality as it is, and not let it affect how I feel.  Whether or not the weather is to my liking, I can be happy because my mood isn’t predicated on anything outside of me!”  I said, with my usual impertinence.  (Yes, I was what you might call “outspoken.”  It’s a wonder I didn’t get fired several times each year!)

“Hrrummphh,” he muttered, and strolled away to find someone who would agree with him.

Fast forward a few decades and I now live in Florida, the “Sunshine State.”  The weather here couldn’t be more different than it was in Idaho. Yet, people still complain about it!  For some, summers are too hot and humid.  For others, winter is too long and cold.  For a few short weeks in November and April, the weather might be just right for almost everyone, as long as there are no hurricanes brewing in the Gulf of Mexico.

Until recently, I, too, complained about the weather here.  Of course, I only complained about the hot and humid summers.  I prefer cold weather.   Then, I realized that it was all a waste of time, energy and opportunity. Instead of fixating on the things I couldn’t change, I decided to take advantage of the opportunity to change the ONE AND ONLY thing there’s any hope of my changing – ME!  That’s the moment when I began to say: “Daily Life IS My Spiritual Practice.”

Is life something happening to us that needs to be controlled, fixed or changed?  Is life, as it is happening day in and day out, something to be resisted?  What if, instead of struggling to make life meet our expectations or fulfill our requirements, we used LIFE (and all of its events, from the sublime to the ridiculous) as our #1 Spiritual Practice?

If what we’re truly after is profound spiritual transformation, then, there is no better path than daily “walking humbly with our God.”  This transformation, of course, does mean that WE, not LIFE, have to CHANGE!  Gasp!  Really?  See if you can find the peace of full-acceptance living.

“Even though it all goes wrong

I stand before the Lord of Song

With nothing on my lips but