“Here I Come to Save the Day!” and Other Delusions of Grandeur September 24, 2021 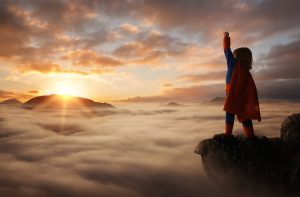 The spiritual journey is filled with amusing day trips.  Have you ever felt like you have to make a choice between becoming enlightened and saving the world?  What if that were a false choice? What if that choice was just another diversion presented by, to, and for “mini-me”?  Many spiritual teachings tell us that there is no need to decide between those two extremes. As we progress on our spiritual journey, what if we discover that the only way to save the world is by becoming enlightened?

More importantly, as we become more enlightened, what if even the noble goal of saving the world ceases to matter?  Let’s begin with the idea of saving the world.  Perhaps it started for you the way it did for me:  With traditional Christianity.

The traditional belief is that Jesus died on the cross to save us from our sins. That’s a great word: sin.  I remember being deathly afraid of confession when I was a child.  What if the priest didn’t grant me absolution?  Would I die with a mortal sin on my soul?  As a young Catholic, I was taught that God could be offended by my inability or unwillingness to follow “His” rules.  What rules?

The Ten Commandments and any other minor laws that His disciples came up with.  And come up with laws His disciples DID!  Maybe not his immediate followers, but those who came in His name in the centuries that followed.  I was an adult when I studied church history and realized that many of the rules I followed were merely church laws.

Still, later as an adult, I found Unity, the educational movement started by Charles and Myrtle Fillmore.  In 1889, they began sharing their healing practices, which included ideas about a less literal interpretation of the life and meaning of Jesus.  The movement they founded clarifies the concept of “save us from our sins” by explaining that the word sin is an old archery term that means “to miss the mark.”

Thus, Jesus came to help us aim and shoot more accurately!  But first, we have to know at what we’re aiming.  What Jesus was aiming at — and HE hit the bullseye! — was a particular way of being.  This way of being can best be described by saying that Jesus was able to overcome the accumulated layers of the purely human animal that is conditioned by life experiences and especially by the stories it tells itself about those experiences and what they mean to who he is.  This conditioned entity is called the body-mind, the egoic self, the pain-body, the mechanical mind, or as I like to call it: “mini-me.”

Although I don’t think I’m evil, I enjoy the cultural reference to Dr. Evil’s smaller and more concentrated pure evil protégé in the Austin Powers movies.  I do believe we live as a diminished version of Who We Really Are.

To me, Jesus overcame his “mini-me” and was able to live from the Essence of Who He Was.  His connection with His Father (God, Principle, Presence…) was so complete that he no longer experienced himself as separate from the Great Creative Power of the Universe.  He lived from that place of awareness – or in other words, he was enlightened.

I think that Jesus discovered a path to his own personal enlightenment, a way to become a “Christ-ed” being without shedding the human skin.  This is the same truth taught in Buddhism, Vedantic traditions, and modern-day teachers, such as Ram Dass, Eckhart Tolle, and Krishnamurti. This path invites us to stop identifying with the conditioned mind and the limited body.  Instead, we focus on the Presence that is available to us in the Present Moment.

My own experience has led me to the conclusion that it’s a bit tougher than that.  We must clearly identify the “mini-me” of ourselves and recognize when s/he is running the show  – almost 99.9% of the time!  Gradually, as we learn to observe ourselves, to notice when we are going down the rabbit holes of thinking, imagining, and projecting, we can learn to separate from “mini-me.”  Our inner dialogue becomes:  “That’s “mini-me” over there, and here, here I AM.”

The practice of continually observing oneself, noticing when the mind has captured us, and bringing our awareness back to the perfection of THIS MOMENT is a powerful spiritual practice.  It is the essence of Brother Lawrence’s book:  Practicing the Presence of God, written in the 17th century.  So, nothing new here!

If enough of us can do this, we might just discover that the world might be saved through us, but it sure as hell won’t be saved BY us.  And as we progress along this path, we eventually realize that neither “being enlightened or saving the world” is our daily goal.  Our daily goal is awakening to the ways we sleepwalk through life. Then, we can choose to wake up and LIVE as the inspirited beings we were created to be.