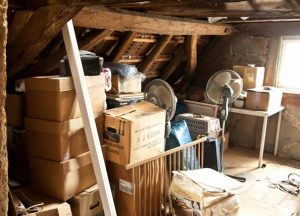 I have too much stuff.  I won’t go so far as to say that I’m a hoarder, but other people have said that.  The trouble began when I bought my first home.  It was a darling little house with a curious history.  Built in 1894 on the Rathdrum Prairie, it used boards re-purposed from a river barge.  Unlike modern homes, this house used an entirely different method of construction.  The exterior walls were made of three layers of barge boards.  These boards were 1½” inches thick and about 12”-15” wide.  Two of the layers were laid horizontally while the middle one was vertical.  The house was 800 sq. ft.  In today’s housing market, that qualifies as a “tiny house.”  My tiny house was moved to its current location in Coeur d’Alene, Idaho, in 1952.  It was placed on a concrete block foundation that created an 800 sq. ft. basement.  That’s when my problem began.

Initially, I didn’t have much of anything to put in the house.  What I did have was secondhand:  bed, bureau, sofa, coffee table (AKA giant wicker chest), dining table and chairs, desk.  During the 16 years I lived in that house, I prospered.  I replaced much of the secondhand furniture with new pieces.  The old ones often went down into the basement, which I envisioned as someday being a rec room or den.

Additionally, now that I had my own place, I moved stuff from my parents’ home. Luckily, my basement had a ton of great shelving built into the basement by the prior owner.  There I could store treasures from my childhood, my high school and college years, along with all the souvenirs I accumulated with each passing year.

Fast forward to 1999, when I married and moved 2200 miles to Jackson, MS.  Faced with the prospect of packing and hauling cross country all my stuff, I divested myself of much of it.  Gone were the notebooks from high school and college. Not once in 16 years had I looked at those notebooks, which proves that we only ever access 20% of the papers were squirrel away.  From 2000 to 2002, I attended ministerial school, after which I was hired at the Unity church I still serve.  That means I made another big move in 2002.  Here is when the problem with too much stuff really escalated.

Not only have I lived in the same house for – dear Lord! – almost 20 years, but we bought a house that has three separate walk-in attic spaces!  Seriously, I don’t even have to use those dreadful pull-down attic stairs.  I just open a door on the second floor and walk into the attic!  I was doomed from the start.

Add to that, I became a mom during those 20 years.  Having waited so long to fulfill this calling, I found myself keeping every little treasure that came home from preschool, elementary school, and, yes, even high school.  My daughter will be 20 soon, and my attic is filled with box after box of school, camp, karate, and Girl Scouts mementos.  Recently, I took a photo off of the refrigerator that had been there since kindergarten. Okay, I admit it.  I’m a hoarder.  I’m a sentimental hoarder of my daughter’s life.  If that was all, I’d probably let myself off with a warning.  But it’s not.

Truth is, I’m a sentimental hoarder of many, many things.  While preparing to sell my childhood home four years ago, I found “treasures” from my Dad’s life with which I couldn’t part.  He had passed away more than a dozen years before, and I wanted to keep these things that had mattered to him.  They went into my attic or into my “craft” area, where there are boxes of stuff I haven’t even classified yet.  Just today, I found a small box of twine and cut-up straws that was my Dad’s.  He was trying to re-create the star-shaped decorations he’d made 40 years before, which had been hung across our front porch at Christmas.  Can I throw away that box of twine and straws?  No, I cannot.

I know this is silly, this hoarding of stuff for sentimental reasons.  I know that I could take pictures of these things and put them in photo albums.  There, I could look at them and remember. But I don’t do that.  Even when I take the pictures, I still keep the stuff!

All of this begs the question:  What am I afraid of?  Simply, I’m scared of making a mistake and throwing out something I will someday wish I’d kept.  And even that explanation is not the whole truth.

It seems that I operate under a few “hidden spells” that Mary O‘Malley elucidates in her book, What’s in the Way IS the Way.  Driving most of my hoarding is the belief that I have to do life perfectly if I am to be loved.  Beneath that belief is the simple fact that I cannot always do life perfectly.  This leads to the much less obvious idea that, therefore, I am not lovable.

The belief that I am not lovable is the programming that runs my life.  Hoarding stuff is just the tip of the iceberg.  Beneath the hoarding is the truly destructive, mechanical way I was wired.  I have only recently realized this.  Healing began to occur when I was able to tell my husband that my overreaction to making a mistake was because of how I felt.  Instead of “I made a mistake, I felt like “I am a mistake.”  Seeing that so clearly was the key to releasing the belief.  It’s not through any sort of effort, or re-programming, although that can be helpful.  It’s just that, as we shine the light of clarity onto our delusions and false beliefs, they evaporate much the same way the fog dissipates under the heat of the sun.

I’m looking forward to seeing when and where that false belief pops up next.  I’m hopeful that I will be able to shine the light of understanding on it.  Without struggling with myself to prove that I am not a mistake, I expect life will get easier.   And, since I’m NOT a mistake, then, even if I throw out something I later wish I hadn’t, I will be able to smile and enjoy all the space I’ve opened up – within myself and my attic!