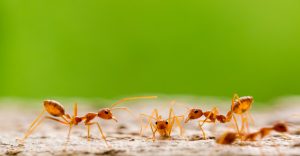 As a child, I was fascinated with my own mind – a sign of what I would later come to realize was the budding introvert that I would become.  One example of my fascination was how I observed myself with the red ants, who were my childhood nemesis.  After stumbling into a red anthill and being bitten by dozens of ants, I would stomp all over the hill, trying to destroy my enemies.  I used to justify smashing anthills by telling myself that they had seriously hurt me because I was allergic to ant bites. A close encounter with an anthill would, within days, result in dozens of water-filled blisters wherever I’d been bitten.

After raining destruction down on the little critters, I would crouch down to watch what happened from a safe distance.  What I saw was the little critters scurrying purposefully around, immediately beginning to restore their home.  Not one of them seemed to pause to wonder why the destruction had taken place or to think about how to build a better, sturdier anthill.  This made me wonder:  Are we, too, just critters on a planet-sized anthill, mechanically living under the whim of a giant capricious god?  Didn’t we behave just like those ants?  When hurricanes or fires or floods destroyed our homes, didn’t we just rebuild them as fast as we could?  It was as if the faster we rebuilt, the more quickly we could deny that it had ever happened. Were we, too, just programmed, mechanical creatures responding unthinkingly to a random act of god?  How could we know?  If our understanding was as limited as that of the ants, maybe our planet was no more than an anthill on the surface of an unimaginably huge planet inhabited by colossal creatures, existing within a gigantic universe?  I had no way of knowing, but the thought intrigued me.