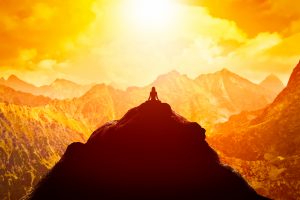 Written in 1807 by William Wordsworth, this poem was an indictment of the industrial revolution, and yet, it applies to our world today more than two hundred years later.  In this “post-modern” age, we are more divorced from nature than ever before.  Insulated in our temperature controlled houses, cars, offices, planes, trains and ships, we are no longer part of the natural world.  It strikes me that this isn’t what Jesus meant when he admonished his followers to be “in the world, not of the world.”

We, who believe that we are on a spiritual journey, are called to live in this world without being influenced, shaped, controlled and corrupted by the world.  We are called to find and hang onto our spiritual truths as if they were a life-preserver thrown to us by the gods of all ages because, in fact, they are!  We are not to separate ourselves from what we truly believe – that there is ONLY one power and one presence – just because we turn on the TV, open our social media accounts or read an opposing view.   We are called to live the truth that we know—our fifth Unity Principle.

A guiding Principle of our country is E Pluribus Unum – out of many ONE.  This is not only a governing principle but it is a spiritual one.  Here, I’m not referring to seeing all people as ONE people, but rather the much harder work of achieving unity within ourselves!  Most of us think we are one person, one mind, one heart, one action.  This is most definitely not the case.  We are many – we are legion!

As humans, we are not called to hold hands around the world and sing Kumbaya. We are called to hold ourselves accountable and separate, not unify, from all that is within is that is not Who We Really Are.  Stop identifying with all the thoughts, feelings, behaviors, beliefs, attitudes and actions that we think we are, that we think we have to have and express and defend in order to be “us.”  We have confused our human nature with our divine, and we suffer. We make others suffer, too.

We are called to become radical in our spirituality.

By radical, I don’t mean what we’ve come to think of as the only definition of the word.  I don’t mean undertaking revolutionary changes in our government, institutions or practices.

I mean radical changes within ourselves.

“Radical” as in arising from of going to a root or source; basic.

“Radical” as in “departing markedly from the usual or customary; extreme or drastic.”

As we come out of our self-imposed isolation, let us emerge more radical than when we went into it.  Let us emerge naked as the day we were born.  Shorn of our opinions, our deepest beliefs about how the world, our country, other people, even ourselves, SHOULD be.  Instead, let us embrace how we were created.  In the image and likeness of ONENESS, of wholeness.

16Just then a man came up to Jesus and inquired, “Teacher, what good thing must I do to obtain eternal life?”

17“Why do you ask Me about what is good?”e Jesus replied. “There is only One who is good. If you want to enter life, keep the commandments.”

Jesus answered, “ ‘Do not murder, do not commit adultery, do not steal, do not bear false witness, 19honor your father and mother, and love your neighbor as yourself.’f”

21Jesus told him, “If you want to be perfect, go, sell your possessions and give to the poor, and you will have treasure in heaven. Then come, follow Me.”

22When the young man heard this, he went away in sorrow, because he had great wealth.

This story isn’t about monetary wealth; it’s about the wealth of personal egoic identity that the young man had. He was rich in his identification with all of his own thoughts, feelings, behaviors, beliefs, attitudes, and actions.  He was just as we are.