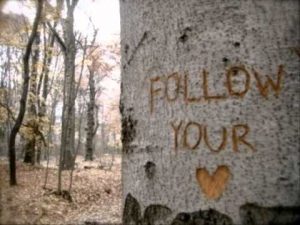 Your Heart’s Desire Will Lead You Home

The following is a true story, and while you may not like that it’s about an incident that happened during a hunting excursion, the hunter involved always believed that it was a clear experience of having been guided by Spirit.  After you read this, ask yourself:  What “home” is my heart’s desire leading me to?”

He was cold and he was lost.  One or the other wasn’t unusual, but both at the same time – weird.  He sat down on a log, and drank the last of the tepid coffee in the thermos bottle. Laying the USGS topo map on his lap, he again took out the compass and the altimeter.  For the tenth time today, he wished that those new GPS devices weren’t so expensive.  Still, he was skilled at using the “old” technology that had faithfully guided explorers for centuries.

It was the old buck that had led him astray.  He’d crossed paths with that deer several times before, and was surprised to see him again.  This late in the season, he figured that meant the big guy was just as smart as he’d always been.  For years it had been his heart’s desire to bring home this particular buck, but it has always eluded him.

He hunted in the old way: scouting trails all summer, and tracking game during season – no tree stands for him.  He thought there was an honor and a dignity to providing for one’s family by using one’s own skills and labor and  scoffed at people who thought that hunters with rifles had an unfair advantage over the animals they hunted. Often he walked 20 to 30 miles a day hunting, and came home emptyhanded 9 times out of 10. Excited by the sighting, he’d taken off after the buck.  He knew he was a long way from where he’d parked his truck, but getting that buck would be a great way to end the season.  Now, hours later, he’d lost the buck and his way.

Following his own advice, he had headed downhill.

“Water flows downhill,” he’d told his kids.  “If you ever get lost in the forest, go downhill until you find water, then follow the water.”

He’d believed that water would eventually flow to some connection with civilization.   Yet, here he sat, on a fallen log, near the bottom of a ravine with no water in sight.  There was no place to camp in the narrow ravine, and camping without food or shelter wasn’t something he truly wanted to contemplate.  He looked at his watch and saw that he had about two hours of daylight left.  Looking up through the forest canopy at the mostly cloudy sky, he figured he actually had less than that.

Suddenly, who should appear on the ridgeline above him?  None other than the old buck!

“Damn,” he thought, “why are you here? You should be miles away by now.”

The old buck just stood looking down at him.  After a few minutes, the buck slowly turned and began to walk away.

“All right, I’ll follow you if that’s what you want.”

Fifteen minutes later they had come to a clearing.  The buck turned his head and looked behind him, then took off into the forest.  From this vantage point, the bare, stone face of Bald Mountain was clearly visible in the distance. Seeing that familiar landmark, he knew exactly where he was. Damn, the buck had led him out!  Overcome by a sense of awe, he quickly found a logging road and followed it back to where he’d left his truck hours earlier.

The sense of awe stayed with him all the way home.  When he arrived there, he’d come to the decision that he would never again hunt that old buck.  There was some indefinable connection between him and that deer, and he knew he owed his life to it.  In an explicable way, he realized that the old saying was true:  His heart’s desire had led him home.